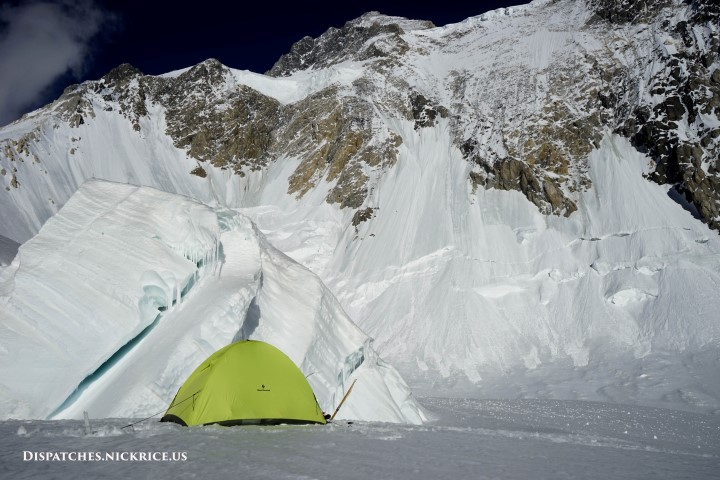 Today, I woke up at midnight, had breakfast with Akbar, prepared my equipment, and met Simone in his base camp. We got a late start but quickly made our way up the ice fall in the moonless, starry night. I had changed my inner boots before this carry, as they were supposed to be much warmer and lighter than those I’d been using, and this quickly proved to be a mistake as we made our way through deep snow that wasn’t nearly as hard as we were expecting. I quickly began developing blisters on both of the arches of my feet and the climb to Camp I was incredibly painful. Once in Camp I, Ferran gave me 120m of fixed rope to carry in addition to my down clothing, sleeping bag, camp III tent, stove, gas, and food. My backpack was close to 30kg as I set out for Camp II in the heat of the day. I struggled to keep up with Simone as my feet became increasingly painful, and at the base of the ice fall en route to Camp II, I decided that it would be wise to camp here and continue to Camp II when the snow was in better condition and the temperature was cooler. Simone and his high altitude porter continued the last three hours to Camp II while I set up my tent and made water to wait out the heat of the afternoon. The evening brought strong wind that blew spindrift everywhere. I went to sleep after the sun set hoping that the wind would die down before my early morning departure for Camp II.