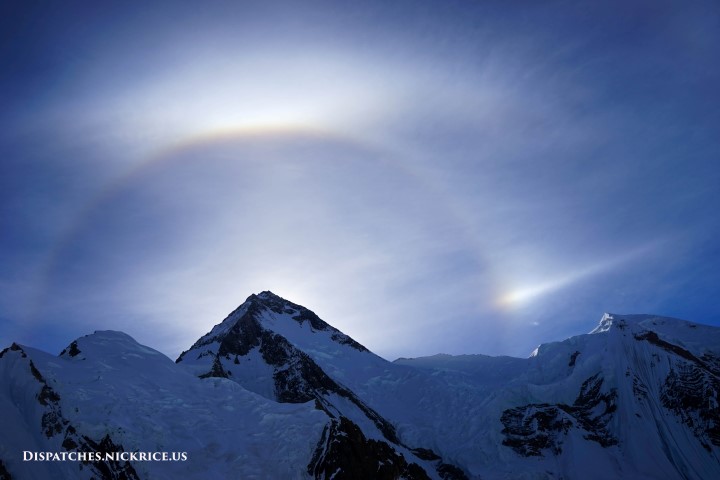 Today, I woke up at 2am in my nearly buried Camp II tent, prepared my backpack for the descent, and ventured out into the windy, cold night to join the Taiwanese for the decent to Camp I. I waited for close to 40 minutes outside while the other members prepared their things and finally around 3:40am, we began descending. We reached Camp I around dawn and I decided to go the rest of the way to Base Camp solo as my blisters required me to pace myself and I didn’t think it fair to impose that pace on others. I spent 45 minutes unpacking equipment to leave in Camp I, then set off toward base camp. The sun warmed me as I passed over the glacier before plunging back into darkness as I continued through the ice fall. The sun made a halo around Gasherbrum I which eventually turned into three intersecting each other. This normally indicates moisture in the air (in the form of ice crystals) which causes the splitting of the colors that make up white light. I didn’t think it boded well for Ferran’s team’s summit push, but I hope they succeed. I arrived just after 8am to base camp and was greeted by Manzoor who had a drink for me and walked me back to our base camp. I quickly showered, had a Pakistani tea, and had a delicious hot breakfast. I finally took a close look at my feet and was horrified at the size and depth of the blisters that I had been ignoring higher up on the mountain. I did what I could with them and hope that they have time to heal before the summit window appears. Muhammad (Pakistan), Nima (Nepal), and five members of the commercial expedition to Gasherbrum II summited yesterday after a harrowing 16 hours of climbing from Camp III. Others (including Kinga) will make an attempt today.