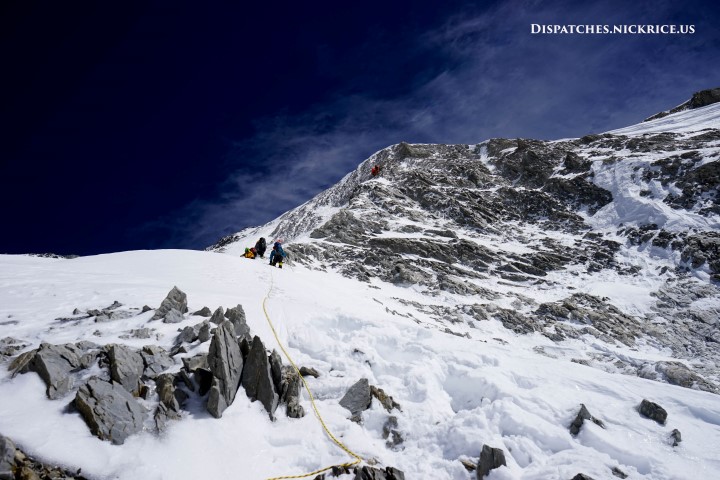 Today, I woke up around 7:30am to a snow-covered base camp, had breakfast and again headed up to Ferran’s camp to see about specific weather predictions. According to their forecast, we will have good weather on Thursday and Friday morning for a summit bid. This would mean that we must begin climbing tomorrow, aiming for either Camp I (if we intend to summit Friday) or Camp II (if we intend to summit Thursday). I began packing my things for the summit in the early afternoon and then received a visit from some Pakistani army officers who chatted with us for over an hour. Afterwards, I spoke with Martin (Czech) about his plans. Just before dinner, we received the tragic news that an avalanche had struck climbers close to the deposit between base camp and Camp I on Broad Peak and that two climbers were severely injured and that one Pakistani HAP was missing. The missing Pakistani happened to be Qumbar, the brother of one of the local staff from the Slovenian Gasherbrum Expedition. The mood in base camp immediately became somber as some of the staff prepared to break the news to the kitchen boy about his brother’s fate. This incident immediately made me rethink my summit bid, as conditions on Broad Peak are quite similar to Gasherbrum I due to the close proximity of the two peaks. Having been jolted out of the delusional optimism that we sometimes feel before summit bids, I began to realize that conditions on Gasherbrum I this year are far from optimal for a summit bid. Just last week, Ferran and Yannick turned around from their summit bid on GI due to too much snow. By Thursday, we will have received another few feet of snow high on the mountain’s flanks. Additionally, weather before and after Thursday is forecast to be bad. If anything were to happen on our summit day that caused us to be delayed, we would be trapped in bad weather, making a rescue close to impossible. Lastly, the temperature at night is significantly warmer when it is cloudy/snowing vs when it is clear, resulting in softer snow bridges over the countless crevasses that riddle the route from Base Camp to Camp II. After taking into consideration all of these factors, in addition to the injuries that had built up from the start of the expedition (my ribs are still hurting from the fall I had when the piton snapped out on my descent from Camp III), I decided that it was too risky for me to attempt the summit and that I would go up only to clean off my gear from the mountain. After dinner, I went up to the Taiwanese camp to discuss their plans. They will go up in the night tonight to Camp II to assess conditions higher on the mountain. If they encounter too much snow, they will also clean their gear off and descend. It would seem that Gasherbrum I may be impossible this year. Perhaps one or two climbers might sneak up the peak and get off safely, however, I’m not willing to take the risk. I’ve had a great expedition overall, having the opportunity to climb a new variation from Camp II to Camp III on Gasherbrum I, to make new friends from all over the world, and to take in some of the most breathtaking scenery in the world from high in the Karakorum. This mountain will be here for centuries and I don’t doubt that I will be back for another attempt.